Here is my favorite example of any western "slug plate" whiskey. According to Thomas, John Carroll started his wholesale liquor endeavor in 1859 at No. 50 First Street in San Francisco. In 1860 he brought his son Richard T. into the business as his bookkeeper and in 1869 Richard was a full partner in the company. In 1870 Richard Carroll formed a partnership with Richard Brainerd & Co. and in 1874 Richard bought Brainerd's interest in the company, and the firm became R.T. Carroll & Co.
The R.T. Carrol fifth is one of the earliest "slug plate" style whiskeys, if not the earliest. As to it's scarcity, it is one of the most difficult to obtain, and one of the few with that sacred embossing "sole agents". The 2002 Thomas book indicated there were 2 examples known to collectors, however I believe there are seven specimens known today. I believe it dates to the mid to later 1870s. 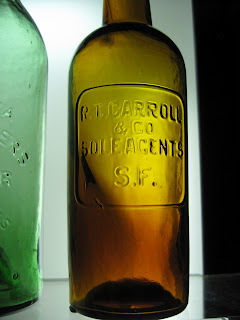 This particular example is untypically crude for a slug plate with heavy whittle effect, swirls , and shades from yellow, to a deep golden amber. I have handled three R.T.Carroll fifths to date, and one was quite plain, and I have heard of at least one other example ( ex-Eastley, Terry, now Kille) which is also crude. I would be interested to know where the known examples were found, and I believe this one was dug in Hollister, Ca. several years ago.

Posted by Westernglassaddict at 11:14 AM