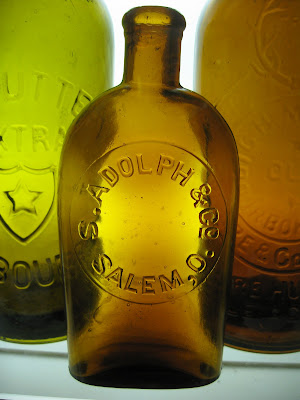 I have posted photo's of the pint size examples of this extremely rare Oregon flask...both the applied, and tooled top version. To date there are three known examples of the pint, while this half pint size remains unique. I acquired this flask directly from Anna Rose Adolph herself in the 1990s. It was found under a house next to a foundation in 1959. The flask was given to Anna Rose shortly thereafter and remained in the Adolph family until I was able to add it to my collection.

Anna Rose is the great, great Granddaughter of Sam Adolph himself, so the history of this particular flask is very meaningful to me. Sam had a saloon and brewery in Salem, from 1873-1886. It was blown about 1883 and while not air vented, has a tooled top. I actually feel these little half pint union oval western flasks are more attractive in many instances, and for some reason more rare than their pint size counterparts. Other than the Fleckenstein and Mayer half pints from Portland, the smaller size western amber flasks seem to typically be harder to come by. Possibly they were small enough to actually fit in a pocket, and therefore were carried everywhere until they were lost or broken. In any case this little piece of Oregon history is the only example to ever turn up in many decades of digging in the Northwest.
Posted by Westernglassaddict at 6:33 PM